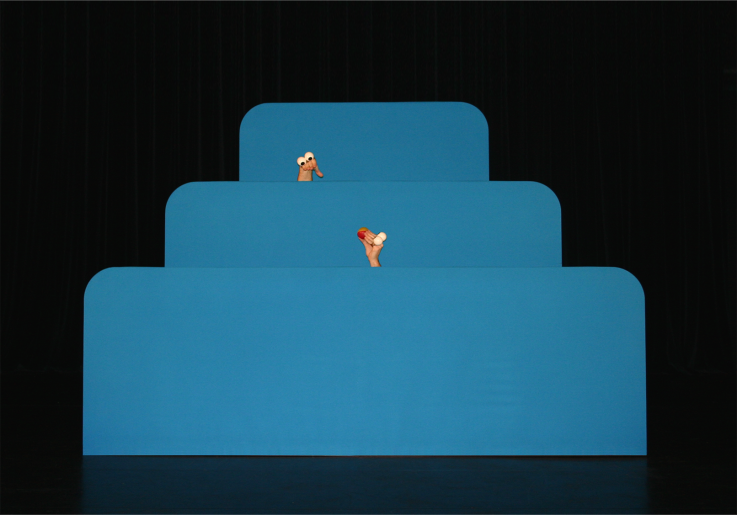 With nothing more than his bare hands and wooden eyes, Lejo has created a unique, fresh style of puppet theatre. “Hands up!” is a lively, wordless performance with lots of music. The puppets display their tricks in a big blue puppet theater. A boisterous dog, two tap dancers, a cow with an eating disorder, an entire children’s choir - including the conductor - and many others, take to the stage. The audience (young and old alike!) soon forgets it is watching two hands.

Under stage name “Lejo”, Leo Petersen has been performing live and filming his puppets since 1995. It started as a school project, and grew to be an act with which he has traveled around the world. His short films are shown on the Dutch version of Sesame Street and many other venues.

“Hands up!” is a string of individual scenes. The performance lasts no longer than 45 minutes, but can be shortened to adjust to any situation. It is a real family show. There are versions for ages 3+ and 4+, but it is also regularly played for younger children or adults. The show is at its best in a dimmed theater space, but can also be performed on an outdoor stage if a number of technical requirements are met.

After the show, cardboard models can be handed out to the audience for them to build their own Lejo puppet. The show is perfect for school performances. Background information about Lejo and the show is included in a handout for teachers. The handout also has suggestions for assignments and games for the classroom.

Lejo travels alone. All the necessary implements can be taken on an airplane at no extra cost. If the distance can be traveled by car, Lejo packs his own lighting and sound equipment and, if necessary, a black backdrop and black theater floor.